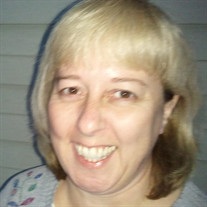 Surrounded by her family, Amy Eileen Redfoot Orr, 57, passed away after a courageous battle with pancreatic cancer Friday, April 7, 2017 at her home in Mableton, GA where she had resided since 1989. Born October 15, 1959 in Franklin, PA, she was the daughter of Rev. Victor LeRoy Redfoot and Stella Jane Ansell Redfoot. The family lived in Cooperstown and Derry, PA during her early years. Prior to moving to Georgia, Amy's high school and young adult years were spent in Seneca, PA. She received her high school diploma from Cranberry High School in 1977 and also graduated from Robert Morris University with a degree in business. She was married to Philip Rodney Orr on June 2, 1984. They became the proud parents of their son, Matthew Philip Orr on July 24,1991. They welcomed Matthew's wife, Sarah Nutial into the family with their wedding on August 2,2014. Amy worked at Quaker State Oil Refining Corporation and Valley Camp Coal in Oil City, PA as an executive assistant. After settling in Georgia, she worked for IBM as an executive assistant for 18 years. She also worked for MCD, appreciating her co-workers there. Her most recent position, until March of this year, was as an executive administration assistant to a high-level executive at Genuine Parts Company. She was very proud to be part of the GPC family. Her gifting was definitely in organization and in attention to detail-completing the task ahead of schedule. Amy had an endearing self-deprecating wit. The youngest members of her extended Nutial and Orr families enjoyed gifts that she sent at Christmas time and other special events. She was an amazing mother to her son, Matthew. The family enjoyed many trips and activities, including competing regularly in trivia games. She was always there to cheer on Matthew at his scholastic and athletic events, and he attributes a considerable amount of his outstanding academic success to her constant support. She was looking forward with pride to his receiving his PhD in Materials Science and Engineering in 2018. Surviving is her husband, Philip Rodney Orr of Mableton; one son, Matthew Philip Orr and his wife, Sarah Nutial Orr of Mableton; her father, Rev. Victor Redfoot of Zelienople, PA; 3 siblings, Donald L. (Kathy Kenyon) Redfoot of Red Lodge, MT; Kathy (David) Himelrick of Baton Rouge, LA; and Joel R. (Carolyn Critchlow) Redfoot of Pittsburgh, PA.; sisters-in-law, Gwen Mosby, Pamela (Terry) O'Neil of Seneca, PA, Laurel L. (Steve) Altemeier of Toccoa, GA and 9 nieces and nephews. She was preceded in death by her mother, Stella Ansell Redfoot in 2005; her father-in-law, Rodney Rothrock Orr in 1984; her mother-in-law, Elsie Jeanette Mohlar Orr in 2013; and her sister-in-law, Debra Jean Shipley Redfoot in 1993. The first viewing and greeting of the family will be at White Columns Chapel, 1115 Clay Rd, Mableton, GA 30126, from 11-3pm on Sunday, April 9th. The second viewing will be at the Hile-Best Funeral Home located at 2781 State Route 257, Seneca, PA 16346 on Friday April 14th from 5-9pm. On Saturday, April 15th, from 10:00 am to 12:00 pm there will be a viewing at the Seneca United Methodist Church, 196 East State Rd, Seneca, PA 16346. The funeral will immediately follow the viewing. Interment will be in the Rockland Cemetery. A meal at the church will follow. Donations in her memory can be made to Venango Youth for Christ, P.O. Box 27, Seneca, PA 16346 or to Seneca UM Church youth group. White Columns Chapel and Cremations is honored to serve the family of Amy R. Orr.

Surrounded by her family, Amy Eileen Redfoot Orr, 57, passed away after a courageous battle with pancreatic cancer Friday, April 7, 2017 at her home in Mableton, GA where she had resided since 1989. Born October 15, 1959 in Franklin, PA, she... View Obituary & Service Information

The family of Amy R. Orr created this Life Tributes page to make it easy to share your memories.

Send flowers to the Orr family.