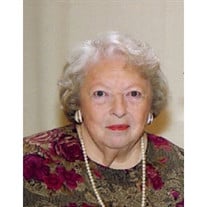 Ann (Hord) McCall, 82, native of Mint Hill, North Carolina and resident of Austell, Georgia passed away in her home under hospice care early on January 8, 2016. Visitation (1PM) and service (3PM) in Georgia will be held Sunday, January 10th at White Columns Funeral Chapel in Mableton. Visitation (1PM) and service (2 PM) in North Carolina will be held Monday, January 11th at Wilson Grove Baptist Church in Mint Hill. Internment at Sunset Memory Gardens will follow the service in Mint Hill. Officiating ministers will be Pastor Clarence Howard of Milford Baptist (GA) and Pastor Rob Mariucci of Wilson Grove Baptist (NC). Ann was born Joe Ann Hord on April 20, 1933 in Mint Hill, North Carolina. She married Lawrence McCall, her high school sweetheart, after a five year courtship in 1952; and they had 63 years of marriage and two children together. Ann was first and foremost a wife and mother, but she also served as church secretary at Airport Boulevard Baptist Church in Mobile, Alabama and at Fortified Hills Baptist Church in Smyrna, Georgia; and as the attendance clerk at South Cobb High School in Austell, GA. Ann was a faithful and active member of Wilson Grove, Milford, Airport Blvd., and Fortified Hills Baptist Churches as she followed Lawrence with his career moves. She served in many capacities including Vacation Bible School leader, a soprano in the choir, and both a GA and Acteens leader. She was also an excellent cook and a gracious hostess welcoming Lawrence’s employees, church family members, and neighbors into her home for meals and social gatherings; even frequently hosting neighborhood children after school and on weekends. Ann’s favorite hobbies included reading, sewing and all sorts of needlework, preserving and canning, singing in the choir, playing the piano, traveling with the seniors’ group at church and other functions with her Sunday School class members, and playing with the family dogs. She also loved flowers and plants of all types and excelled at caring for and arranging them. Ann was predeceased by her parents, Victor and Ruby (Belk) Hord; her brother, Leon Hord; and her son, Daniel McCall. She is survived by her husband, Lawrence McCall; daughter, Lori McCall; sister-in-law, Phyllis (Flowe) Hord; nephews, Randy (Shari) Hord, Kevin (Maria) Hord, Mark (Michelle) Hord; and niece Libbi Hord. Ann was also blessed with and survived by many nieces and nephews on the McCall side of her family. Pallbearers: Mickey McCall, Randy Hord, Ronnie Thompson, Mott Simpson, Sammy Smart, and John Burleson. In Lieu of flowers in Georgia, the family requests memorial donations to Milford Baptist Church at 1030 Milford Church Rd, Marietta, GA 30060 or to the charitable organization of your choice.

The family of Ann McCall created this Life Tributes page to make it easy to share your memories.

Send flowers to the McCall family.