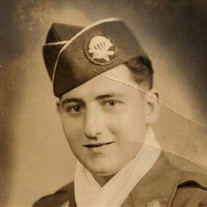 William "Bill" Thomas Beard, 91, of Mableton, died September 16, 2016. He was born January 10, 1925 in Atlanta, the son of Gertrude and William Henderson Beard. Bill grew up in Grant Park, Mableton and West End. At the age of 18, he was drafted into the United States Army where he fought in the European Campaign of WW II. He was a paratrooper with the Airborne Division-508th Parachute Infantry Regiment, and fought in the Battle of the Bulge in Belgium. Bill was discharged on December 14, 1945, one month before his 21st birthday. Upon leaving the army, Bill returned to Atlanta. He worked for the Veteran's Administration while attending law school at night. He married Elizabeth Whitehead and they had four children, Phil, Steve, Margaret and Billy. Bill practiced law for 60 years in Cobb County, retiring in 2012. He was a faithful member and deacon at Mt. Pisgah Baptist Church. He was always a family man, enjoying time with his siblings and their families as well as his children, grandchildren and great-grandchildren. He coached Little League baseball for a number of years and was a member of the Masonic Lodge. Bill was a loyal member of the Lions Club of Mableton where he served in a number of leadership roles including President. Bill was unfailingly cheerful with a witty personality and a sharp mind until the very end. Bill was preceded in death by his parents, William and Gertrude Beard, his two sisters, Virginia and Sue, and his brother, Doug. He is survived by his wife, Elizabeth and his four children, Phil (Susan), Steve (Kathy), Margaret Ayres and Billy (Lori). He is also survived by eight grandchildren: Chris, Amy, Erin, Kerry, Lewis, Walker, Miles and Lisa. His great-grandchildren are Ruthie, Zaccary, Padraig, Nicolas, Lucas, Willa, Gus, Audrey and Dezi. White Columns Chapel & Cremations is honored to serve the family of Bill Beard.

William "Bill" Thomas Beard, 91, of Mableton, died September 16, 2016. He was born January 10, 1925 in Atlanta, the son of Gertrude and William Henderson Beard. Bill grew up in Grant Park, Mableton and West End. At the age of 18, he was... View Obituary & Service Information

The family of Bill Beard created this Life Tributes page to make it easy to share your memories.

Send flowers to the Beard family.