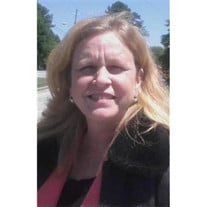 Carol Annette Cummins Kirby, age 53, of Powder Springs passed away early in the morning on Wednesday, July 25, 2012. She was born to Victor Virgil Cummins and Dorothy Kent Cummins on October 25, 1958 in Atlanta, Georgia. She was a beautiful young lady who had been homecoming queen 2 years in a row. She was also talented and had played the saxophone in the band. She graduated Lithia Springs High School and began to work in the banking industry. On December 10, 1976, Carol Annette Cummins married Timmy Lee Kirby. They were later blessed with one son, Jacob Lee Kirby. Their family later grew to include her lovable jack russells who she enjoyed walking and caring for. She was very loved by everyone in her family and will be missed greatly. Carol Annette Cummins Kirby is preceded in death by her father, Victor Virgil Cummins. Survivors include her husband of 36 years, Timmy Lee Kirby, who is the owner and operator of Kirby's Vacuum; son, Jacob Lee Kirby of Powder Springs; mother, Dorothy Kent Cummins of Winston; sisters, Christy Cummins Slater and her husband, Mike, of Gainesville and Amy Cummins Watkins of Winston; father in law, Ralph Kirby; mother in law, Betty Kirby; aunt, Betty and her husband, Henry Keith, of Houston, TX; uncle, Dennis Cummins and his wife, Jane, of Stone Mountain; cousins: Don Keith, Charlotte Novac, DeAne Beebe, Denise Demick, and Deidre Zink; and many more beloved cousins, nieces, and nephews. The family will receive friends 6:00pm-8:00pm Friday, July 27, 2012 at White Columns Funeral Chapel in Mableton. A memorial service will be held in the funeral home's chapel at 11:00am Saturday, July 28, 2012 with Rev. Marion Beaver officiating.

Carol Annette Cummins Kirby, age 53, of Powder Springs passed away early in the morning on Wednesday, July 25, 2012. She was born to Victor Virgil Cummins and Dorothy Kent Cummins on October 25, 1958 in Atlanta, Georgia. She was a beautiful... View Obituary & Service Information

The family of Carol Kirby created this Life Tributes page to make it easy to share your memories.

Send flowers to the Kirby family.