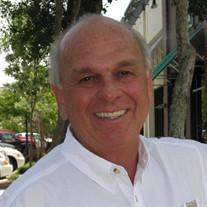 Charles Jackson Ruff, Sr, 76, of Charleston, South Carolina passed away peacefully on October 22nd, 2017, surrounded by his wife and children. Charles graduated from South Cobb High School in Austell in 1959. He received his Associate of Science in Civil Engineering degree from The Southern Technical Institute in 1961. Charles owned and operated a men’s clothing store for 25 years - “Charles J. Ruff Store for Men” - on Bankhead Highway in Mableton. This iconic store was the well known gathering spot for the infamous “Mableton Mafia”. Charles was the President of Charu Properties and Accurate Appraisal where he was a real estate broker, land developer, and appraiser. Charles served on the Cobb County Board of Commissioners (1976-1980). He was a member of the Latham Lodge #12 F&AM and the Yaarab Shrine Temple. Charles retired in 2008 and was able to realize a lifelong dream - living on a sailboat he named Osprey and cruising the Intercoastal Waterway. Charles settled down in Charleston, SC in 2013 which he referred to as “Paradise”. He was a member of Ashley River Baptist Church. Charles was preceded in death by his parents, Hattie Mae Rutledge Ruff (The Duchess of Mableton) and M.B. Ruff. Survivors include his wife, Jo Ann Bankston Ruff of Charleston, SC; children, Kimberly Ruff (Bender) Betbeze of Marietta, Kelly Ruff (Pete) Eichorn of Austin, TX, and Charles “Chad” (Erica) Ruff, Jr. of Atlanta; stepchildren, Mary Beth (Kevin) Dukes of Pauley’s Island, SC and Karen Kennedy (Jeff) Woodman of Mt. Pleasant, SC. Charles leaves a legacy of eleven grandchildren: Bo, Connor, and Jack Betbeze, Natalie and Elaina Eichorn, Skyler and Jackson Ruff, Aubrey and Hampton Woodman, and Rachel and Ryan Foy. Memorial services will be held in White Columns Funeral Chapel in Mableton on Saturday, October 28 at 12:00 pm. The family will receive friends one hour prior to the service. In lieu of flowers, donations may be made to autismspeaks.org. White Columns Chapel & Cremations is honored to serve the family of Charles Jackson Ruff.

Charles Jackson Ruff, Sr, 76, of Charleston, South Carolina passed away peacefully on October 22nd, 2017, surrounded by his wife and children. Charles graduated from South Cobb High School in Austell in 1959. He received his Associate of... View Obituary & Service Information

The family of Charles J. Ruff Sr. created this Life Tributes page to make it easy to share your memories.

Send flowers to the Ruff family.