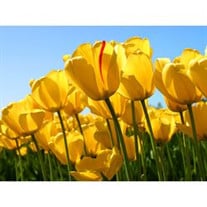 Edna Nilsen Ellingsen, age 94, of Smyrna, formerly of Whitfield, Pennsylvania, passed away peacefully in the evening of Thursday, September 18, 2014 at Wellstar Community Hospice/Tranquility in Austell. Edna was born to Nikolai and Anna Nilsen in Omistad, Norway on September 4, 1920. She immigrated to the United States with her parents at the age of 10 and lived in New York - Edna was one of the last Ellis Island immigrants. She later met and married Emil Ellingsen. The couple had one son together, Mark. Although Edna had worked in the insurance business, she was happiest being a homemaker and being able spend time with her family. Edna stayed active throughout her life both work and play - while in Pennsylvania, she was very involved in Crop Walk activities to raise funds and awareness to help fight hunger. She stayed on the move as a census taker among many various community events that she wasn't boastful of. She was an active member of the Lutheran Nativity Church in Austell. Edna also enjoyed baking and could talk politics with the best of them. Edna Nilsen Ellingsen is preceded in death by her husband, Emil Ellingsen, and parents, Nikolai and Anna Nilsen. She is survived by her son, Rev. Dr. Mark Ellingsen and his wife, Betsey Shaw Ellingsen, of Smyrna; grandchildren, Patrick Ellingsen and his wife Leah of Brunswick, Elizabeth Santos and her husband Jorge of South Carolina, and Peter Ellingsen and his fiance Ali Spangler of Oregon; and two great-grandchildren, Kate and Jack Ellingsen both of Brunswick. Funeral Services were held at 3:00 PM Sunday, September 28, 2014 at Nativity Lutheran Church in Austell. Graveside Services were held at 10:00 AM Tuesday, September 30, 2014 at Chattanooga National Cemetery in Tennessee. (If you are planning on attending the graveside, please arrive prior to 10:00 AM as the cemetery is on a tight schedule.) In lieu of flowers, donations may be made to the Presbyterian Village: To give in memory of or in honor of a friend or loved one, please contact the Development Office at 404-231-5758 or 800-808-3309.

The family of Edna Ellingsen created this Life Tributes page to make it easy to share your memories.

Send flowers to the Ellingsen family.