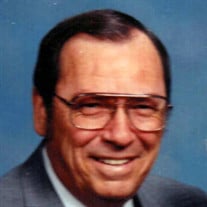 Edward E. Thompson, 87 passed away on April 16, 2020 in Smyrna, GA. Ed was born on May 2, 1932 in Douglasville, GA and was the youngest of his eight siblings. Due to gathering restrictions a memorial service will be held at a later date. He is preceded in death by his loving wife Evelyn Brooks Thompson (1993), his parents James Ollen Thompson and Cora Gaston Thompson and his seven brothers. Ed is survived by his sister Gerry Thompson Broome and her children Janet Broome Hollis (Doug) Cheryl Broome Pearson (Bill), Stan Broome (Laura) and Mark Broome (Becky), his sister in law Kathy Brooks Rhodes (Rick), brother in law Joe Meeks of Englewood, TN and his daughters Kelly Meeks Self (Steve), Karen Meeks Newton (Mike). His nieces/nephews Dan Nesbitt Jr, (Cathy), Robby Nesbitt (Robin) Leslie Nesbitt Warren (Grant) and Kristi Nesbitt Stephenson (Scott), Rick Thompson and Sandra Thompson Lewis. Also, many great and great-great nieces and nephews. Ed was born in Douglasville, GA, moved to McQuirter, GA and then to Mableton, GA with his family. He and his sweetheart Evelyn “Ebba” Brooks Thompson married in 1954 and shortly thereafter Ed was drafted into the US Army. He took basic training at Ft. Gordon, GA, and additional training at Fort Sam Houston, San Antonio, Texas. He served from 1954-1956 in the Eighth Army and 8233 Honor Guard and spent nineteen months in Tokyo, Japan. His duties while serving in the Honor Guard were to guard US generals and the military installation in Tokyo. Members of the Honor Guard also guarded any visiting heads of state or dignitaries, the fallen in war and attended state ceremonies, especially funerals. When his tour of duty was over, he returned home to his loving wife Evelyn. She surprised him and welcomed him to their beautiful new home she had built for them while he was serving in the Army. Ed worked at Southern Railroad for many years, then moved on to a sales job at Bellhouse windows. He took a new sales job at the Pennwalt company which sold laundry supplies to commercial laundries including hotel and hospital laundries. He brought on National Linen as a client and they were his largest client, and also the largest account at his company. Ed was the top salesman at his company for many years and won numerous sales awards. He and his late wife Evelyn enjoyed many sales incentive trips to Palm Springs, Colorado Springs, Ft. Lauderdale and Bermuda. Ed’s job at Pennwalt took him and his late wife Evelyn to Birmingham, AL for a few years, then they returned to GA and resided in Stone Mountain, GA. They attended Campus Church. Ed retired from Pennwalt in 1993 and moved back to Austell, then to Smyrna to be close to his family. Through the years Ed enjoyed spending time petting his kittens Calico Babe, Miss OK, Fern and Honey. After retiring Ed enjoyed traveling, walking, swimming, church luncheons and spending time with his family. He was a member of South Cobb Church of Christ and loved his church family. In lieu of flowers, donations may be made to South Cobb Church of Christ, 1776 Clay Road, Mableton, GA 30126 or to the Disabled Veterans Association. Interment was at Mount Harmony Memorial Gardens. White Columns Chapel & Cremations is honored to serve the family of Edward Thompson.

Edward E. Thompson, 87 passed away on April 16, 2020 in Smyrna, GA. Ed was born on May 2, 1932 in Douglasville, GA and was the youngest of his eight siblings. Due to gathering restrictions a memorial service will be held at a later date. He... View Obituary & Service Information

The family of Edward Thompson created this Life Tributes page to make it easy to share your memories.

Send flowers to the Thompson family.