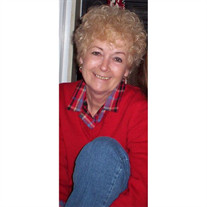 Elizabeth Kay Pruitt Slaine, age 68, of Mableton passed away late in the afternoon on Saturday, June 29, 2013 at Vitas Hospice in Austell. Mrs. Slaine was born to Albert Pruitt and Ila Bea Hutto Pruitt on August 19, 1944 in Hawkinsville, Georgia. A native of Hawkinsville, she grew up in Brunswick and lived in Jacksonville for most of her life. A talented crafter and painter, Mrs. Slaine was an active member of the Freeman Poole Senior Center. Married to Edward J. Slaine, Mrs. Slaine had two beautiful children, Christy and Brent. Her family later grew to include three grandchildren, Parker, Joel, and Natalie. A loving wife, mother, and grandmother, Elizabeth Kay Pruitt Slaine is survived by her husband, Edward J. Slaine of Mableton; daughter, Christy McKinney and her husband Danny of Mableton; son, Brent Parker and his wife Rosie of Jacksonville, Florida; grandchildren, Parker McKinney, Joel McKinney, and Natalie McKinney; and sister, Teen Smith of Anderson, Indiana. The family will receive friends 9:30 AM - 10:00 AM Tuesday, July 2, 2013 within the chapel of White Columns Funeral Chapel in Mableton with Funeral Services to follow. A private interment will be held at the Georgia National Cemetery in Canton.

The family of Elizabeth Slaine created this Life Tributes page to make it easy to share your memories.

Send flowers to the Slaine family.