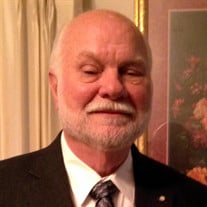 Ellis Leon “Chief” Brownlee, 81, of Douglasville passed away Monday, December 7, 2020. The youngest son of Mr. & Mrs. F.M. Brownlee, Sr., Ellis was born in Atlanta, Georgia on October 9, 1939. A graduate of the class of 1957 of West Fulton High School, Ellis Brownlee married Darnice McLarty in 1962. He was a proud public servant of the City of Atlanta and Fulton County Sheriff’s Department. He worked with the City of Atlanta Water Works and the City of Atlanta’s Fire Department before going to work for the Fulton County Sheriff’s Department in 1964, where he retired as Fulton County Jail Director in 1988. Ellis had a distinguished career in Fulton County, overseeing the design and construction of the “new” Fulton County Jail from 1986-1988, and serving as the founding President of the Georgia Jail Association. He was also a member of the National Sheriff’s Association and founding member of the Georgia Sheriff’s Association. Ellis was the recipient of the WAGA/Channel 5 Silver Badge Award in April 1973 for Community Service and Humane treatment of his fellow men. He was anonymously nominated for the Silver Badge Award by inmates of the Fulton County Jail. A 1985 editorial in The Atlanta Constitution by Joe Dolman captured the impact Ellis made in the jail and on the lives of those he was charged with caring for: The thing is, people seem to trust Brownlee…a little good faith can perform wonders. Before Brownlee was chief jailer, it is said, he once walked into a cellblock that was out of control. The inmates had figured out how to beat the locking system, and about 100 of them were milling around, refusing to return to their cells. It could have turned into a riot. Brownlee stood there, surrounded and unarmed, and talked them out of their rebellion. During his time as Jail Director, Ellis oversaw the care and housing of Marcus Wayne Chenault, the gunman who killed the mother of Reverend Martin Luther King, Jr., Alberta Williams King; and Wayne Williams, the notorious Atlanta Child Serial Killer. Ellis was known for his compassion and non-judgmental treatment of all charged in his care, as he believed his responsibility was to the safety and well-being of all who spent time in the Fulton County Jail. An Atlanta native, Ellis sang in a Gospel quartet throughout the 1960s and 1970s. He also loved salt-water surf fishing and river fishing, and was known to spend eight hours at a time staring at the tip of a fishing pole. Family was the center point of Ellis’ life and brought him the greatest joy throughout his retirement. Ellis is loved and remembered by his wife of 58 years, Darnice McLarty Brownlee and son Joe Brownlee of Valdosta, GA, and his wife, Mary Beth; and his sister Barbara Brownlee Holman of Colbert, GA; three grandchildren, Joshua Brownlee of Birmingham, AL, Shane Brownlee of Acworth, GA, and his wife, Danielle, and Elizabeth Ellis Brownlee of Valdosta. He was blessed in life to have two great grandchildren who also survive him, Henry Brownlee and Caleb Brownlee, both of Acworth. Ellis is also survived by many loving nieces, nephews, extended family members, and friends. Ellis is preceded in death by his parents, Mr. & Mrs. F.M. Brownlee, Sr., and his three brothers, Neal Brownlee, Frank Brownlee, Jr., and Donald Brownlee; and five sisters, Evie Lou Brownlee Corbin, Virginia Brownlee Collins, Linnel Brownlee Holman, Monteen Brownlee Hamilton, and Elizabeth Brownlee Harbin. A private service of remembrance will be held for members of the family on Saturday, December 12, at Gene Davis White Columns Chapel in Mableton at 1 p.m. A graveside service will follow immediately after at Mount Harmony Memorial Gardens. For those who wish, flowers and remembrances may be sent to Gene Davis White Columns Chapel in Mableton. White Columns Chapel & Cremations is honored to serve the family of Ellis "Chief" Brownlee.

The family of Ellis Brownlee created this Life Tributes page to make it easy to share your memories.

Send flowers to the Brownlee family.