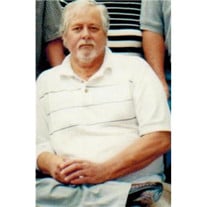 Ernest Clyde Harvey, age 71, of Mableton passed away Wednesday, November 19, 2014 at Wellstar Kennestone Hospital in Marietta. Mr. Harvey was born to Clyde William Harvey and Dora Jean Bond Harvey on June 28, 1943 in Atlanta, Georgia. He was one of five children. Mr. Harvey loved life and tried to live it to the fullest: he enjoyed playing his guitar, especially rock 'n roll! He also enjoyed fishing on Lake Altoona. Most of all, he loved spending time with his family and friends. Mr. Harvey was a member of the Baptist faith and had always loved the Lord, Jesus Christ, and found salvation through him. His testimony was his love of people, young and old, and having a host of friends. Ernest Clyde Harvey is preceded in death by his parents, Clyde and Dora Harvey. He is survived by his daughter, Melissa Dawn Harvey of Carrollton; grandchildren, Cody, Josie, and Jorga all of Carrollton; sister, Barbara E. Appling of Orlando, Florida; brothers, Walter Harvey of Mableton, James V. Harvey of Mableton, and Roy Lee Harvey of Cartersville; and a vast number of nieces and nephews whom he loved very much. Mr. Harvey was cremated under the care of White Columns Funeral Chapel in Mableton on Thursday, November 20, 2014. The family will hold a private memorial service in his honor at a later date.

The family of Ernest Harvey created this Life Tributes page to make it easy to share your memories.

Send flowers to the Harvey family.