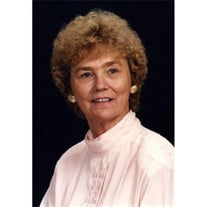 Evelyn Irene Hurst, age 75, passed away on May 5, 2011. She was born on April 27, 1936 in Fork Shoal, South Carolina and raised in Greenville, South Carolina. She was the daughter of Thomas Gossett and Alice "Jones" Gossett. Evelyn was one of eight children; three brothers, Alvin, Thomas and Charles and four sisters, Ruth, Alice, Doris and Francis. She married John Guy Hurst, Jr. in Atlanta, GA on May 3, 1952 and had four children: Wayne, Brenda, John and Kenneth. Evelyn began her career as a kindergarten teacher and retired in 2007 from Cobb County Public Schools after 12 years of service as a bus monitor. As a resident of Mableton for 55 years, she attended South Cobb Baptist Church and became a beloved member. Evelyn is preceded in death by her husband of 28 years, John Guy Hurst, Jr.; her parents, Thomas and Alice Gossett; her brothers, Alvin, Thomas, and Charles Gossett; and her sisters, Doris Humphries and Francis Gossett. She is survived by her children, Wayne Hurst of Mableton, Brenda and Roger Speight of Mableton, and Kenneth and Angela Hurst of Powder Springs; eight grandchildren, Chris Hurst of St. Louis, Matt Hurst of Douglasville, Melissa Hurst of Douglasville, April Speight Carson of Mableton, Amber Speight of Mableton, Audrey Speight of Mableton, John Hurst of Powder Springs, and Brett Hurst of Powder Springs; 7 great-grandchilren; 2 great-grandchildren on the way; and her sisters, Ruth Culpepper and Alice Camp. The family will receive friends on Friday, May 6, 2011 from 4:00pm-8:00pm and Saturday, May 7, 2011 from 9:00am-11:00am at White Columns Chapel in Mableton. A funeral service will be held at 11:00am on Saturday, May 7, 2011 in the funeral home chapel. Interment will follow at Mozley Memorial Gardens in Lithia Springs. Donations may be made to the American Lung Association: American Lung Association National Headquarters 1301 Pennsylvania Ave., NW, Suite 800 Washington, DC 20004 (202) 785-3355

Evelyn Irene Hurst, age 75, passed away on May 5, 2011. She was born on April 27, 1936 in Fork Shoal, South Carolina and raised in Greenville, South Carolina. She was the daughter of Thomas Gossett and Alice "Jones" Gossett. Evelyn was one of... View Obituary & Service Information

The family of Evelyn Hurst created this Life Tributes page to make it easy to share your memories.

Send flowers to the Hurst family.