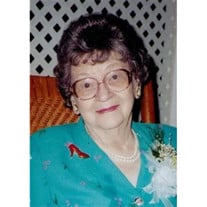 Biography Hattie Mae Rutledge Ruff, age 89, of Mableton passed away on July 22, 2012. She was the 10th child of Walter H. Rutledge and Annie Noland Rutledge, who are deceased. She was a devoted mother and 'Ma Ma' to her son, grandchildren, and great grandchildren. "Miss Hattie" was known as the "Dutchess of Mableton" to many especially the political community. She served on the board of the Cobb County Chamber of Commerce, the board of the Cobb County Heart Association, the board of the Cobb County Cancer Society and was appointed to the Board of the Department of Human Resources of Georgia by three different governors. She also was instrumental in the election of her son, Charles, to the Cobb County Board of Commissioners. She is a member of New Hope Baptist Church and attended the non-denomination services at Presbyterian Village for the past 9 years. She was a member of Adams Lodge #279, which became Leland Chapter #235 Order of the Eastern Star, where she served several times as Worthy Matron and various Starpoints. She held the post of District Grand Deputy to Manitoba, Canada and attended the Canadian Grand Chapter from 1984 through 1987. She was so active in the Eastern Star that several local lodges made her an Honorary Member. Hattie Mae was preceded in death by her husband M. B. Ruff. They were happily married from 1940 until his passing in 1972. They owned and operated Ruff's Fabric stores in and about the Atlanta area for many years. Mr. Ruff was an organizer of the original South Cobb Bank, which became Georgia State Bank and then First Union. She is survived by her only child, Charles Jackson Ruff, Sr. and his wife Jo Ann Bankston-Ruff of Mt. Pleasant, SC formerly of Mableton, GA., grand children Kimberly Ruff Betbeze and her husband Bender Betbeze, of Kennesaw, Kelly Ruff Eichorn and her husband, Peter Eichorn of Austin, Texas and Charles (Chad) Ruff, Jr. and his wife Erica Asti Ruff of Marietta, GA, step grand children Mary Beth Foy and Karen Kennedy Woodman and her husband Jeff Woodman all of Mt. Pleasant, SC and great grand children Bo, Connor and Jack Betbeze, Skyler and Jackson Ruff, Natalie and Elaina Eichorn. The family will receive friends 6:00 p.m. to 8 p.m. Tuesday July 24 at White Columns Funeral Chapel in Mableton with a funeral service at the Chapel 2pm Wednesday July 25 with Rev. Don Rackley and Chaplain Debbie Wells officiating. Interment will follow at Mt. Harmony Memorial Gardens in Mableton. Donations may be made to the American Heart Association at P. O. Box 840692, Dallas TX 75284-0692 or call 678-224-2000.

Biography Hattie Mae Rutledge Ruff, age 89, of Mableton passed away on July 22, 2012. She was the 10th child of Walter H. Rutledge and Annie Noland Rutledge, who are deceased. She was a devoted mother and 'Ma Ma' to her son, grandchildren, and... View Obituary & Service Information

The family of Hattie Ruff created this Life Tributes page to make it easy to share your memories.

Send flowers to the Ruff family.