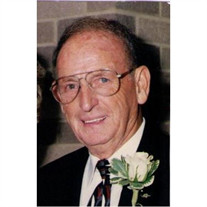 J. E. "Gene" Roberts, age 85, of Mableton passed away on Monday, March 28, 2011. After serving as a medic for the Navy in WWII, Gene was involved in the shaping of Mableton through his involvement in community and civic affairs. He served as a full time volunteer in community affairs since his retirement from General Motors Assembly Plant in Doraville in 1975. Gene was a past president of the South Cobb Lions Club and was a member of the board of directors many times. He had also served on many committees as the public relations chairman including the Cancer Committee, Peach Bowl Committee, Contest and Awards Committee, and Nominating Committee. In 1982, he served as chairman of the South Cobb Lions 30th Anniversary Program. He had been awarded the highest honor by the Lions Club, the Melvin Jones Award, Lion of the Year, and Mr. Legionnaire. Gene also cared for youths; he assisted in the organization of the South Cobb Lions Youth Program where more than 800 young people were involved. The program was honored as the largest and best program in the State sponsored by the Lions. In the American Legion, Gene served as adjutant, community service chairman, public relations chairman, and oratorical chairman. He served as co-chairman of the 3rd Annual Senior Citizens Christmas Party, a program introduced to the Post by Gene, which helped feed and entertain more than 300 senior citizens. Gene was very proud of his involvement with the American Cancer Society. In 1975, the South Cobb branch was scheduled to be closed due to a shortage of funds. Mr. Roberts was deemed the Unit Director and was able to secure funds from local clubs and organizations to pay utility bills and purchase equipment for the branch. He was able to recruit additional volunteers and expand upon educational programs. He increased community awareness through Civic Clubs, Service Organizations, Churches, PTA's, and other organizations. Within two years, the branch became a unit of the American Cancer Society and has been named the number one Unit in the State of Georgia in patient service for three years. In addition to ensuring the survival and success of the branch, Gene counseled cancer patients and families and assisted them in receiving assistance from the Veterans Administration, State Aid Cancer Program, Medicare & Medicaid. Along with the many other civic and community organizations that Gene was involved in, he also helped fund and serve the South Cobb Fire Department. He was president of the Civic Club that founded the South Cobb Fire Department and purchased the first fire truck that South Cobb had. He served as a volunteer fireman and as chairman of the Fireman's Club. He enjoyed heading up the fish frys and other fund raising projects to pay for other necessities such as additional trucks and hoses. He assisted getting the Fire Department under the county tax system in an unincorporated area, which was the first in the state of Georgia to do so. Gene had countless relations with other organizations and awards from other groups. He was a strong individual who had accomplished much in his lifetime. He helped shape a community and give strength to others to ensure that that community prospered for future generations. He was a model citizen with a very giving heart. Gene was preceded in death by his son, John Eugene Roberts, Jr. and his parents, John and Grace Roberts. He is survived by his beautiful wife, Sarah "Sandy" Roberts; son, Doug Roberts; daughter in law, Diane Gibbs Roberts; stepdaughters, Jane McCurley and Judy Parker; stepsons, Bill Brookshire and David Brookshire; 12 grandchildren and 11 great-grandchildren. The family will receive friends 6:00-8:00pm Tuesday, March 29, 2011 at Gene Davis-White Columns Chapel in Mableton. A funeral service will be held 11:00am at Mableton First Baptist Church with Rev. Stephen Byrd, Rev. David York, and Rev. Terry Phillips officiating. Interment will follow at Mount Harmony Memorial Gardens. In lieu of flowers, donations may be made to the American Cancer Society. Donations may be made by phone: 770-429-0089 Donations may be made by mail: American Cancer Society Donations Division 1825 Barrett Lakes Blvd. Suite 280 Kennesaw, GA 30144 *Note: When mailing donations, please include Mr. Gene Robert's name, your contact information (name, address, and telephone number), and how you would like the card that is sent to the family to be signed. Donations may be made by internet: https://www.cancer.org/involved/donate/donateonlinenow/index *Note: For your convenience, there is a link to the American Cancer Society in the bottom left hand corner of the page.

J. E. "Gene" Roberts, age 85, of Mableton passed away on Monday, March 28, 2011. After serving as a medic for the Navy in WWII, Gene was involved in the shaping of Mableton through his involvement in community and civic affairs. He served as... View Obituary & Service Information

The family of J. E. Gene Roberts created this Life Tributes page to make it easy to share your memories.

Send flowers to the Roberts family.