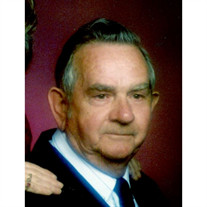 James Ishmael Ferguson ("Sarge"), age 88, of Mableton, passed away Thursday, March 24, 2016. Born October 27, 1927 in New Holland, Georgia, to parents William Chester Ferguson and Nannie Mae Crumley. A proud veteran, "Sarge" retired from the U.S. Army in 1968, after 20 years of service. He then went on to manage Happy Herman's Restaurant at Greenbriar, and then own and operate Plaza Luncheonette in Atlanta, Ferguson's Restaurant in Mableton, and Jefferson Park Cafe in College Park. He retired a second time from Square D. Electrical Co. in 1987. After Mr. Ferguson's third retirement from Home Depot in 2002, he continued to do small engine repairs for the community in his home, as well as cut grass for friends, family, and neighbors of the community. Mr. Ferguson is preceeded in death by his wife of 43 years, Gerda Hinkel Ferguson, who passed away in 2001, and his son Robbie Lee Ferguson, who passed away in 1971. Survivors include three sons, Oren W. Ferguson, James I. Ferguson II, and Michael W. Ferguson; two daughters, Jenny Ferguson, and Lynn Williams; his brother, Harley Ferguson; three sisters, Bobbie Emmett, Lavartha Parker, and Merlene Cathy; 11 grandchildren, and 7 great grandchildren. His family received friends Friday, March 24, 2016 at White Columns Chapel from 2:00 PM - 4:00 PM, and again from 6:00 PM - 8:00 PM. The funeral service was held Saturday, March 26, 2016 at 1:00 PM, in our chapel, with Rev. Gary Simmons officiating. Interment and military honors followed at Mt. Harmony Gardens.

The family of James I Ferguson created this Life Tributes page to make it easy to share your memories.

Send flowers to the Ferguson family.