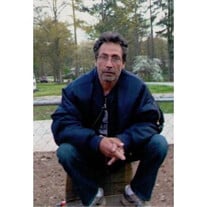 Jimmy Edward "Eddie" Sheriff, age 50, of Austell passed away on June 15, 2012 surrounded by his loved ones at home. Eddie was born to Marvin W. Sheriff and Betty Joyce Polk Sheriff on January 27, 1962 in Atlanta, Georgia. After graduating from high school, he worked as a mechanic for all of his life until becoming the owner and operator of his wrecker company, Sheriff Towing. Eddie was a member of the Atlanta Baptist Tabernacle Church for many years. He was a kind-hearted man who would give the shirt off of his back to anyone in need. Eddie was such a giving person, he made it a point to adopt families over the holidays and bring them turkeys and hams. Eddie's family described him as "the fun one" of the bunch. There was never a dull moment when Eddie was around as many can attest to. He enjoyed working and repairing his collection of cars and harleys. Eddie was a wonderful family man and truly loved his grandchildren. He and Diana consider all of them to be their babies. Eddie is survived by his loving wife, Diana Lynne Sheriff; sons, Jeffery Sheriff and his wife Brittney of Austell, Brian Sheriff of Austell, Robert Sheriff and his wife Raven of Austell, Steven Sheriff and his wife Elizabeth of Austell; parents, Marvin and Betty Sheriff; sister, Donna and her husband Michael Butero of Mocksville, North Carolina; brothers, Ted Sheriff and his wife Sandra of Austell, Robbie Sheriff and his wife Alma of Villa Rica, Billy Sheriff of Atlanta, Michael Sheriff and his wife Jo Jo of Austell, and Richard Sheriff and his wife Anita of Newnan; and 13 grandchildren - Tyler, Brandon, Casey, Robert Jr., Kaylynne, Jordyn, Jeffrey Jr., Haven, Steven Jr., Joshua, Gabriella, Hailey, and Tallen. The family of Jimmy Edward "Eddie" Sheriff will receive friends on Monday, June 18, 2012 from 12:00pm-8:00pm and again on Tuesday, June 19, 2012 from 9:00am-2:00pm at White Columns Funeral Chapel in Mableton. A funeral service will be held at 2:00pm Tuesday, June 19, 2012 in the funeral home's chapel with Pastor Bobby Simmons officiating. Interment will follow at Georgia Memorial Park in Marietta, Georgia. To see the memorial video created by Eddie's family, please copy and paste the following URL: http://www.YouTube.com/watch?v=k246R6NlcqI&GMT=18

Jimmy Edward "Eddie" Sheriff, age 50, of Austell passed away on June 15, 2012 surrounded by his loved ones at home. Eddie was born to Marvin W. Sheriff and Betty Joyce Polk Sheriff on January 27, 1962 in Atlanta, Georgia. After graduating from... View Obituary & Service Information

The family of Jimmy Sheriff created this Life Tributes page to make it easy to share your memories.

Send flowers to the Sheriff family.