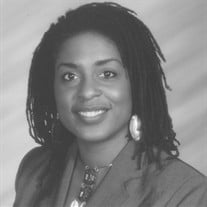 Karen LaVerne Glover, age 59, peacefully returned to her heavenly home on June 12, 2017, in Marietta, GA following a lengthy illness.Ms. Glover is preceded in death by her father, Samuel L. Glover, Sr. She is survived by her mother, Everline (Brooks) Glover of Morristown, NJ, sister, Sandra L. Glover Hood (George, Jr.), and nephews, Jared B. Glover, and Seth L. Patterson, all from Nashville, TN; uncles, Nelson Brooks, Jr. (Marion), of Parsippany, NJ, and Robert L. Brooks (Janet), of Whiting, NJ; and special caregiver/cousin, Cynthia Brooks Bullock (John), of Marietta, GA, along with numerous cousins in NY, NJ, and PA. Ms. Glover is also survived by special beloved friends, Dawn Howard and Djuana Barnes, both of NJ. Ms. Glover’s beloved felines: ‘Gilly’ and ‘Pepper’ were a source of great joy for Karen as well. She was a devoted member of the Christian Cultural Center in Brooklyn, NY (Pastor A.R. Bernard) until her illness prevented her from attending. Ms. Glover was born and raised in Morristown, NJ. She was baptized at an early age in The Church of God in Christ for All Saints in Morristown, NJ. She was a National Honor Society and Girls State member and graduated from Morristown High School in 1976 with a full academic scholarship from The Mennen Company. Ms. Glover earned a Bachelor’s of Fine Arts degree in Fashion Merchandising & Management from Pratt Institute, Brooklyn, NY where she grew to love New York City. Ms. Glover had a passion for reading, writing and learning and thus, in 1991 she earned a Masters in Corporate Communications from Farleigh Dickenson University, Madison, NJ, and a Master’s Certificate in Internet Marketing and Social Media from the University of San Francisco online in 2011. Her career was multi-faceted having worked in key positions which included The United Negro College Fund, The Woodson Foundation, Motown, Universal, UniWorld Group, GRP Recording Co., Music in Cinema, Paramount, Black Beat Magazine and numerous advertising, marketing, editing and copywriting jobs. In recent years, Ms. Glover was self-employed as a copy and content writer/editor, “Catchphrase Copywriting,” which was a source of great pride for her. Over the course of her career she met and worked closely with up-and-coming artists as well as some of the biggest names in the music and entertainment industry. Ms. Glover had a passion for all things beautiful and colorful. She loved music, the ocean, sunsets, rainbows, flowers and the shiny sidewalks of Manhattan that glisten in the light of night. A Celebration of Life memorial service will be held in New York at a date to be determined. In lieu of flowers, the family asks that memorial gifts be made in Karen Glover’s name to the Alzheimer’s Association of Greater New Jersey, 3 Eves Drive, Suite 310, Marlton, NJ 08053, 973-866-8143, in honor of her mother for whom she was primary caregiver, and be sure to enter Karen L. Glover’s name in the Memo section of a check or at alz.org click on Tribute Information at the bottom of the page and enter Karen L. Glover’s name. White Columns Chapel & Cremations is honored to serve the family of Karen Laverne Glover.

Karen LaVerne Glover, age 59, peacefully returned to her heavenly home on June 12, 2017, in Marietta, GA following a lengthy illness.Ms. Glover is preceded in death by her father, Samuel L. Glover, Sr. She is survived by her mother, Everline... View Obituary & Service Information

The family of Karen Glover created this Life Tributes page to make it easy to share your memories.

Send flowers to the Glover family.