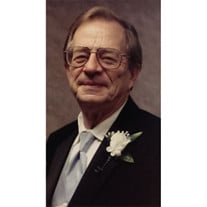 Lawrence Cecil Fincher Jr., age 82, of Mableton, peacefully passed away on Monday, January 20, 2014 at Wellstar Community Hospice-Tranquility in Austell. He was born on March 2, 1931 in Gulf Port, Mississippi to Lawrence Cecil Fincher Sr. and Virginia Austin Fincher. Lawrence met his wife while attending Georgia Tech and she was attending Crawford Long Hospital to receive a degree in nursing. They crossed paths on a bus when going home to visit parents and the rest is history. He was married to Betty Davis on March 20th 1954 in Atlanta, GA. He loved to play the piano and saxophone and also had a love for airplanes. He liked keeping busy with projects, whether it was related to around the house or improving his knowledge on things he could use in everyday life. What he loved most was serving Jehovah God. What always intrigued him was this question, "How could a God of Love be so cruel to torment people forever in a burning hellfire?" This question was answered from the scriptures by one of Jehovah's Witnesses who called at his house in 1958. He continued to study the Bible and was baptized in 1961. Since that time he has conducted many Bible studies and has helped his students' progress towards baptism. Lawrence was very regular in his meeting attendance and in his field ministry despite his having to deal with cancer for the past 6 years. Lawrence was an encouragement to all of the friends and his family. He has always had a positive attitude despite numerous trials throughout his life, but depended on Jehovah to endure. A recipient of a Bachelors Degree from Georgia Tech in Chemical Engineering, he worked as an inspector for the EPA after serving in the U.S. Air Force. Survivors include his wife of 59 years, Betty Davis Fincher; daughters, Ellen Thomas and her husband Bruce, Ann Friebus and her husband Tim, Nancy Shanley and her husband Steve, Jana Tyler and her husband Mike, and Sara Fincher; grandchildren, Dan McCarter, Megan Tyler, Matt Shanley, Laralee Shanley, Suzanne Shanley; great-grandchildren and a large extended family of many friends that loved him very much. Mr. Fincher was cremated under the care of White Columns Funeral Chapel in Mableton. Memorial Services will be held at 1:00 PM Saturday, January 25, 2014 at Kingdom Hall of Jehovah's Witnesses in Marietta.

The family of Lawrence Fincher created this Life Tributes page to make it easy to share your memories.

Send flowers to the Fincher family.