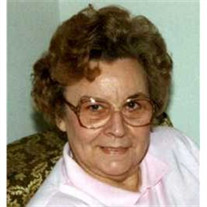 Louise H. Gaines, age 84, of Smyrna passed away on Thursday, September 22, 2011 at Wellstar Tranquility Hospice in Austell. Louise was born December 13, 1926 in Calhoun, GA the daughter of Dolphus and Willie Mae Harper. Louise proudly worked most of her life, beginning in 1943 at Bell Bomber Plant in Marietta, GA at the age of sixteen. She met her husband of nearly 65 years in Shannon, GA where they both worked at Brighton Mills. They married in Rome, GA on January 18, 1947. She was employed by several companies throughout her life including many years with Avon in Chamblee, GA, eventually retiring from Lockheed in 1988, but her most fulfilling role of all was as "Mammy" to her two grandchildren. In her retirement she was an avid traveler and some of her happiest moments were spent with her friends and family roaming the world. Her favorite place to visit was Switzerland. Her friends and family will always remember her determination, love of a good joke and sense of style. Louise was dearly loved and the following are left to mourn her loss and celebrate her life: Her husband, George A. Gaines, Jr., her two daughters Connie Renee Alender (Joe) and Anita Gaines, two cherished grandchildren Elisabeth and Aaron Alender, granddog Mia and dear family friend Nancy Perry. She is also survived by her siblings Retha Taylor, Margaret Lanning, Ted Harper, Lloyd Harper, Arnold Harper, Mozelle Newton, Larry Harper and various nieces and nephews. The family will receive friends on Saturday, September 24, 2011 from 10:00am-12:00pm at White Columns Funeral Chapel. A service will be held at 12:00pm on Saturday with family members & friends officiating. Interment will be held at a later date at Eastview Cemetery in Rome, Georgia. In lieu of flowers, donations to a charity to prevent blindness would be appreciated.

The family of Louise Gaines created this Life Tributes page to make it easy to share your memories.

Send flowers to the Gaines family.