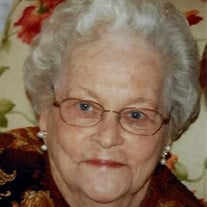 Marjorie Gay, age 91, of Austell passed away on Saturday, March 3, 2018. Survivors include her sons, Steve and wife Belinda Gay and Eric and wife Jan Gay; grandchildren, Amanda McCullough, Stephanie Trawick, Rosemary, Will, and Laine Gay; five great-children, and sister, Glendon Morreale. She was preceded in death by her husband of 62 years, William “Bill” Gay and her grandson, Brandon Gay. Marjorie was born November 25, 1926, in Dellrose, Tennessee and was raised on her parents’ rural farm. She attended a one-room schoolhouse with about thirty children. Her grade had three girls. After graduating high school, Marjorie went to work for Tennessee Eastman at Oakridge as a cubicle operator. She was unaware at the time that she was helping make the atomic bomb. After the war, she returned to her childhood home and was picked to accompany her 75-year-old grandmother to visit Atlanta. She decided to stay in Atlanta and took a job at Puritan Chemical Company as a receptionist. She attended Fortified Hills Baptist Church where the young people asked her to join them in the choir. Before she knew what was happening, she ended up on the front row right in the middle. As she glanced over the congregation, she noticed a “rather cute” guy sitting with his mother, “an unusual happening.” It was there that she met her husband of 62 years, Bill Gay. Later Bill would say his mom asked him who the new girl was in the choir. He replied he didn’t know but would find out. Marjorie and Bill were married on June 4, 1948, and lived in the West End area of Atlanta. They were active at West End Baptist Church where Marjorie also taught Sunday school. “A beautiful son,” Steve was born on June 9, 1952, followed by “another beautiful son,” Eric, on March 16, 1956. They moved to East Point in 1958 where they lived for 41 years. As founding members of Dogwood Hills Baptist, Marjorie and Bill were extremely active throughout the church’s 46-year history. Marjorie worked for a brief time during her sons’ high school tenure in the cafeteria at Headland HS. For most of her adult life, she was a “stay at home mom and never regretted it.” Marjorie and Bill moved to Austell in 1999, and they attended First Baptist Church Mableton. Funeral services will be held in White Columns Chapel Saturday, March 10 at 2pm with the family receiving friends one hour prior to the service. Interment will take place at Westview Cemetery.

The family of Marjorie Gay created this Life Tributes page to make it easy to share your memories.

Marjorie Gay, age 91, of Austell passed away on Saturday, March...

Send flowers to the Gay family.