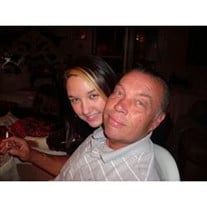 Richard "Rick" Dewayne Chastain, age 55, of Powder Springs passed away on Saturday, January 8, 2011. Born to Richard and Mary Joan Chastain on September 22, 1955 in Cartersville, GA, Rick achieved several great things in his life. He was a son to his parents, a brother to his siblings, Joseph and Thomas, a husband to his beloved wife, Janice, a father to his two children, Alexis and Kenneth, and a long time business owner of ABC Gutter Company since 1995. Rick is preceded in death by his father, Richard Mayes Chastain. He is survived by his wife, Janice Chastain of Powder Springs; daughter, Alexis Chastain of Powder Springs; stepson, Kenneth Thompson of Marietta; mother, Mary Jo Hollis of Marietta; and two brothers, Joseph Chastain, Sr. of Marietta and Thomas Chastain of Powder Springs. The family will be receiving friends on Saturday, January 15, 2011 from 5:00pm-8:00pm and on Sunday, January 16, 2011 from 11:00am-1:00pm. There will be a memorial service on Sunday, January 16, 2011 at 1:00pm with Minister Greg Ogle officiating.

The family of Richard Chastain created this Life Tributes page to make it easy to share your memories.

Send flowers to the Chastain family.