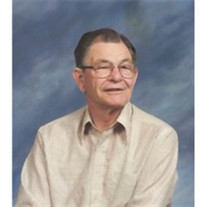 Robert Windell Acree, age 82, of Austell passed away on November 7, 2011 at Wellstar Cobb Hospital in Austell. Robert was born on April 3, 1929 to Samual and Gladys Acree in Douglasville, Georgia. He graduated from Douglas County High School in 1947 and joined the U.S. Army the following year in 1948. He earned several medals and honors throughout his duration including the Korean Service Medal, United Nations Service Medal, and Good Conduct Medal. He retired in 1952 as a Sergeant. While in the service, he met the love of his life, Mary Martin from New Boston, Texas. The couple was married on August 23, 1951 and had one beautiful daughter, Anita. The family continued to grow including a granddaughter, Shanna Meherg, and four great-grandchildren, Alyssa and Harmony Boyd and Steven and Clayton Meherg. Robert retired from the Federal Reserve Bank in 1993 after 35 years of dedicated service. His family will remember him as a "wise guy" who was a real prankster. He loved to laugh and to spread that joy to others. Robert Windell Acree is preceded in death by his father, Samual Frank Acree of Carrollton who passed on June 14, 1983 and his mother, Gladys Irene Ergle Acree of Douglasville who passed on March 15, 1976. He is survived by his wife of 60 years, Mary Martin Acree; daughter, Anita G. Richards of Bowdon; granddaughter, Shanna G. Meherg of Bowdon; great-grandchildren, Alyssa and Harmony Boyd of Buchanan and Clayton and Steven Meherg of Bowdon; sisters, Margaret Yarbrough of Lagrange, Betty Bearden of Palmetto, Nell Prince of Douglasville, Brenda Boone of Newnan, and Carole Crews of Bremen; brothers, Sammy Acree of Newnan and Ricky Acree of Newnan. The family will receive friends 5:00pm-8:00pm Thursday, November 10, 2011 at White Columns Funeral Chapel in Mableton with Rev. Terry Braswell Sr. officiating. A funeral service will be held at 1:00pm Friday, November 11, 2011 in the funeral home's chapel. Interment will follow at Mount Harmony Memorial Gardens in Mableton.

Robert Windell Acree, age 82, of Austell passed away on November 7, 2011 at Wellstar Cobb Hospital in Austell. Robert was born on April 3, 1929 to Samual and Gladys Acree in Douglasville, Georgia. He graduated from Douglas County High School... View Obituary & Service Information

The family of Robert Acree created this Life Tributes page to make it easy to share your memories.

Robert Windell Acree, age 82, of Austell passed away on November...

Send flowers to the Acree family.