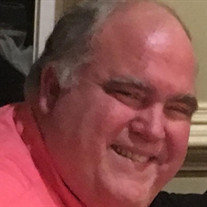 Robert Leon Lee, Jr., resident of Powder Springs, GA , died in his sleep at age 53, Tuesday, April 23, 2019, at 3:17am while at home being comforted by his wife Tricia, two daughters, Caroline and Katherine, and mother, Judy. Robert’s valiant will to live was overcome by glioblastoma multiforme (GBM), an aggressive form of brain cancer. Robert was born and raised in Lake City, FL, where, in his teens, he began a broadcasting career that lasted for over 35 years. Robert was deeply religious and heavily involved in Catholic parishes, starting in his hometown at Epiphany Catholic Church. He regularly worshipped and served all positions at Mass except Priest. His charisma and humor made him larger than life; his kindness left everyone as either a close friend, or a distant friend. Born June 3, 1965, Robert grew up in Columbia County Florida where he attended Eastside Elementary, Niblack Elementary, Lake City Junior High and Columbia High School, graduating in 1983. As student body president at CHS, he was celebrated for winning meal alternatives and a jukebox in the cafeteria. He studied journalism at Lake City Community College (Florida Gateway College) and graduated with his BA in Broadcast Journalism from the University of West Florida in 1988. Robert was a fixture of campus life while attending each institution, and he continued contact with his brothers at Sigma Alpha Epsilon fraternity. Robert and his wife Tricia married May 26, 2001 in Jacksonville, FL. His family was completed with daughters Caroline and Katherine. Robert’s heart belonged to Tricia and his girls, but he left a piece of it for an extensive group of friends and admirers. As a local television newsman with a DJ side hustle, and a devout Catholic, Robert formed social networks in multiple media markets and parishes in the Southeast, including Pensacola, FL, New Bern, NC, Florence, SC, Jacksonville, FL, Dallas/Ft. Worth, TX, and finally the Atlanta, GA area where he was very active in his home parish, Holy Family Catholic Church. He landed his dream job at Headline News in 2001. He served as a writer and producer for HLN and CNN until 2018. Robert served his community in many ways during his life, but serving as PTA President at his daughters' schools made him very proud. His greatest joy came from being Santa Claus for different events each Christmas season, a tradition he began during his teens. Over time he grew to resemble a plain clothes Saint Nick year-round. The look was complete when he overheard a child whisper to his daughter, “I didn’t know your father was Santa Claus.” Although losing cognitive skills during his final days, he lit up and engaged as best he could as people from all over and from his past visited and reminisced about their adventures, capers, pranks, and exploits together and remembered dancing, singing, laughing, and living life with full joy as Robert’s friends. He is preceded in death by his father Robert Leon Lee, Sr., and he leaves behind his loving wife, Tricia Lee; daughters Caroline Grace Lee and Katherine Rebecca Lee; mother Judith K. Lee; brothers Joseph Lee, Michael Lee, and James Lee; sister Amy Hassenrick; and numerous nieces and nephews who will always remember their fun-loving Uncle Robert. Visitation is set for 4:00 - 7:00pm, with vigil service starting at 6:15pm, Sunday April 28, 2019 at White Columns Funeral Chapel, 1115 Clay Road, Mableton, GA 30126, www.whitecolumnsfuneralchapel.com. Funeral mass is set for 11:00am, Monday, April 29, 2019 at Holy Family Catholic Church, 3401 Lower Roswell Road, Marietta, GA 30068. Preservice viewing begins at 10:00am. In lieu of flowers, donations in his memory may be made to The American Brain Tumor Association, www.abta.org.

Robert Leon Lee, Jr., resident of Powder Springs, GA , died in his sleep at age 53, Tuesday, April 23, 2019, at 3:17am while at home being comforted by his wife Tricia, two daughters, Caroline and Katherine, and mother, Judy. Robert&#8217;s... View Obituary & Service Information

The family of Robert Lee, Jr created this Life Tributes page to make it easy to share your memories.

Send flowers to the Lee, family.