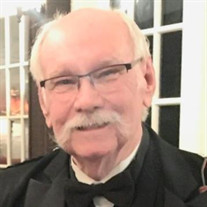 DACHS, Sr., RONALD LEE After a courageous and valiant battle with long term illnesses, Ronald Lee Dachs, Sr. passed away on January 19, 2022 with his beloved wife by his side. He is surrounded by love from family and devoted friends. Born in Bridgeport, Ct, on May 19,1943. He became the faithful son of Captain Lukas Victor Dachs of Montana and Edna Dorothy Wright of Ellijay, Georgia. Being a military family in the Navy, they moved to places in Africa, England and other ports finally settling in Atlanta, Georgia after the death of his father. He graduated from Sylvan Hill High School and attended the University of Georgia night school while working at Gulf Oil Corporation where he met his wife of 55 years. They were married on October 1, 1966 He was inducted into the United States Army in June 1966. He served with the United States Army-Europe 4th Armored Division rising to the rank of Sergeant. Upon his honorable discharge, he attended the University of Georgia (GO DAWGS) and earned a Bachelor of Business Administration in 1971, He had a successful career as a Regional Manager, specializing in IT support with United Parcel Service, Atlanta and retired in June 1995. Following his retirement, he attended The National Center for Paralegal Training and was Certified as a Paralegal. After that he settled into a life of retirement. Ron was an honorable man and true to his word. He loved his family and was a true friend to those whose path he crossed. He and his family travelled to Montana to visit the Dachs" family, across the United States multiple times, North and South and to Edinburgh Scotland. He was a car enthusiast, and rebuilt two l957 Chevrolets. He was an Alumni of University of Georgia and was a passionate DAWGS Fan. He enjoyed playing tennis, was a Sponsor of Clan Ross Tent at Stone Mountain Scottish Games for over 30 years. He loved playing the pipes and marching in many parades in the Atlanta Area. He was a historian of American History and Scottish History. He was proud to be a Veteran. He is preceded in death by his father, Lukas V. Dachs, his mother, Edna Dorothy Wright , his sister, Donna Dachs and his grandson, Sir Shawn Dachs. He is survived by his wife, Angela McKoy Dachs, his two sons, Ronald Lee Dachs, Jr. and Michael Ryan Dachs, his granddaughter Charlotte Monroe Dachs, his brothers Paul Rodney Dachs, his wife Estelle Dachs and Keith Victor Dachs, his wife Millie Dachs, his nieces and nephews, Lucas Richard Dachs, Hannah Marie Dachs, Marcelena Elaine Dachs Botsford, and Mark Dachs. Outside of work he belonged to the American Legion Post 21, Marietta, GA. He was a Founding Sponsor of the National Museum of the United States Army, He was a Member of Scottish Clan Ross, Retired Member of the Atholl Pipes and Drums of Stone Mountain, Member of Saint Andrews Society Atlanta, Member of The National WWII Museum, Member of the Military Order of the World Wars, Atlanta and had reached the Dignity of Grand Officer of the Knights Templar. In lieu of flowers, the family has requested that donations be made to the Cystic Fibrosis Foundation. The family will receive friends Saturday, February 5 from 2pm to 4pm at White Columns Chapel. Having proudly served, arrangements are being made for Ron's remains to be placed in the Georgia National Cemetery, Canton, Georgia. White Columns Chapel & Cremations is honored to serve the family of Ronald Dachs Sr. In lieu of flowers, the family requests donations be made to the Cystic Fibrosis Foundation: cff.org/donate

DACHS, Sr., RONALD LEE After a courageous and valiant battle with long term illnesses, Ronald Lee Dachs, Sr. passed away on January 19, 2022 with his beloved wife by his side. He is surrounded by love from family and devoted friends. Born in... View Obituary & Service Information

The family of Ronald Dachs Sr. created this Life Tributes page to make it easy to share your memories.

DACHS, Sr., RONALD LEE
After a courageous and valiant battle...