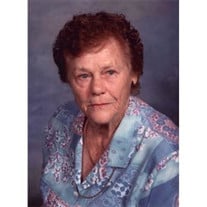 Rosemary Juanita Murray Blair, age 89, of Mableton passed away on Wednesday, January 23, 2013 at Wellstar Community Hospice/Tranquility in Austell. Rosemary was born to George Murray and Ethel Alford Murray on October 17, 1923 in Richland Springs, Texas. After graduating from high school, she attended college until enlisting as an Apprentice Seaman in the U.S. Navy on December 28, 1943 in Dallas, Texas. Rosemary was stationed in Bronx, New York, Milledgeville, Georgia, Camp Wallace, Texas, and Norfolk, Virginia. She was honorably discharged at her last station, Norfolk on August 28, 1945. Rosemary later met and married John Howard Blair. They had five sons together, Kenneth, John Jr. "Jack", Dwight, Mark, and David. Their family later grew to include seven grandchildren and four great-grandchildren. Rosemary was an extremely devoted mother, grandmother, and great-grandmother who will be cherished by her family and will be greatly missed by all who knew her. She was a resident of Mableton since 1952 and was a long time member of Trinity United Methodist Church. She was part of the women's organization through the church, the United Methodist Women. She worked as a clerk for the U.S. Postal Service in Mableton until retiring 23 years later. Rosemary Juanita Murray Blair is preceded in death by her husband, John Howard Blair Sr., and her oldest son, Kenneth Blair. She is survived by her sons, John H. "Jack" Blair Jr. and his wife Rita of Sparta, Dwight Blair of Mableton, Mark Blair of Douglasville, and David Blair and his wife Brenda of Mableton; brother, George Murray of Lake Worth, Texas; sister in law, Christine Blair, who she was very close to; grandchildren, Ken, Jason, Rose, Brian, Brandon, Fallon, and Brittany; and four great-grandchildren, Parker, Abigail, Aven, and Lucy. The family will receive friends 6:00 pm - 8:00 pm Friday, January 25, 2013 at White Columns Funeral Chapel in Mableton. Funeral Services will be held at 11:00 am Saturday, January 26, 2013 (In State at 10:30 am) at Trinity United Methodist Church. Interment will follow at Westview Cemetery in Atlanta.

The family of Rosemary Blair created this Life Tributes page to make it easy to share your memories.

Send flowers to the Blair family.