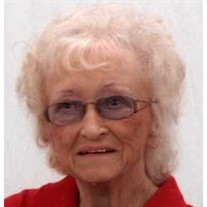 Wallace, Ruby Emily Jane of Hiram formerly of Austell and Rockmart passed away Monday, June 3, 2013 at Wellstar Tranquility at Cobb. A member of Piedmont Avenue Baptist Church, Ruby was born to Price and Ollie Summerour on May 17, 1929 in Dawsonville,... View Obituary & Service Information

The family of Ruby Wallace created this Life Tributes page to make it easy to share your memories.

Send flowers to the Wallace family.