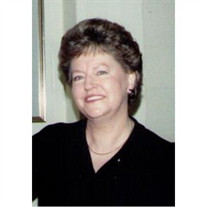 Susan Marie Morgan Gatlin, age 77, of Mableton passed away on Thursday, February 9, 2012 surrounded by her loving family. Mrs. Gatlin was born to Lewie and Mabel Morgan on June 3, 1934 in Carroll County in Clem, Georgia. She later married Mr. Clarence Eugene Gatlin and her family grew to include her five children: Barbara, Pamela, James, Janice, and Ryan. Mr. and Mrs. Gatlin were blessed with many beautiful grandchildren and great-grandchildren. She was a proud homemaker and enjoyed spending time with her family. She was also a member of First Christian Church in Mableton. Mrs. Gatlin is preceded in death by her husband, Clarence Eugene Gatlin on December 28, 2004. She is survived by her daughters, Barbara Crowhurst of Lithia Springs, GA and Pamela McGuire of Muscadine, AL; son, James Knight, Jr. of Anniston, AL; step-daughter, Janice Rose of Dexter, GA; step-son, Ryan Gatlin of Dublin, GA; sister, Charlotte Posey of Whitesburg, GA; 9 grandchildren and 5 great-grandchildren. The family will receive friends on Friday, February 10, 2012 from 6:00pm-8:00pm at White Columns Funeral Chapel in Mableton. A funeral service will be held on Saturday, February 11, 2012 at 2:00pm in the funeral home chapel with Pastor Richard Vartenisian officiating. Interment will follow at Mount Harmony Memorial Gardens in Mableton.

The family of Susan Gatlin created this Life Tributes page to make it easy to share your memories.

Susan Marie Morgan Gatlin, age 77, of Mableton passed away on...

Send flowers to the Gatlin family.