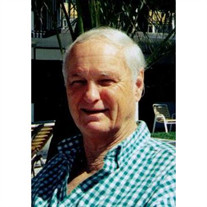 Biography William "Bill" Gene Cooper, age 81, of Mableton passed away on Friday, March 2, 2012 at Wellstar Cobb Hospital in Austell. Bill was born to Lunie S. Cooper and Mary Mayo Cooper on April 24, 1931 in Tampa, Florida. He was a veteran who proudly served our country through the United States Coast Guard until being honorably discharged on December 27, 1954. A graduate of Southern Technical Institute, Bill worked as an engineer for IBM, one of the largest publicly traded technology companies in the world. He was a man of many talents and proved to be an experienced carpenter, manufacturing many practical pieces such as the beautiful cherry wood table that he created. He was an accomplished web master and had built the website for Mrs. Cooper's artwork. Bill was a devoted member of Roswell Street Baptist Church in Marietta and enjoyed spending time with his church family. He was not a man of many words, but truely loved his family and his neighbors. He adored his grandchildren and would talk about them often over his morning cup of coffee. Bill was known as the ancestry sleuth of the family. He also loved animals and he and his wife, Jackie, would tend to rescued animals. William "Bill" Gene Cooper will be missed by his family, neighbors, fellow church members, and friends. Bill is survived by his wife of 51 years, Jacqueline "Jackie" Dewberry Cooper; son, Dr. J. Michael Cooper and his wife Cindy; daughter, Melody Cooper McKenna; grandchildren, Nick Elzey, Shannon McKenna, Mary McKenna, Ryan McKenna, and Meggi McKenna; step-grandchildren, Stephanie and her husband Daniel Riley and Christie and her husband Allen Groves; and step-great-grandchildren, Jackson Groves and Colston Groves. The family will receive friends Sunday, March 4, 2012 from 2:00pm to 5:00pm at Gene Davis-White Columns Funeral Chapel in Mableton. A private funeral service will be held on Monday, March 5, 2012 at 1:00pm at the funeral home with Rev. Joe Buckner officiating. Cremation will follow.

Biography William "Bill" Gene Cooper, age 81, of Mableton passed away on Friday, March 2, 2012 at Wellstar Cobb Hospital in Austell. Bill was born to Lunie S. Cooper and Mary Mayo Cooper on April 24, 1931 in Tampa, Florida. He was a veteran... View Obituary & Service Information

The family of William Cooper created this Life Tributes page to make it easy to share your memories.

Send flowers to the Cooper family.