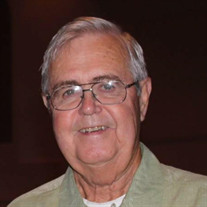 William Earl Martin Jr. (Nick), age 79, of Waleska, Georgia passed away December 28. He is survived by his wife of 52 years, Frances Eaton Martin; children, Jennifer McCloskey of Dallas, GA, Billy Martin of Waleska, GA, Brian Martin and wife Kim Martin, also of Dallas, GA, and his nine grandchildren, Jessica, Hailey, Conner, Tyler, Kyle, Garrett, Brandon, Jackson, Maggie, and many friends. Mr. Martin was born into the Methodist faith to William Earl and Virginia Day Martin on November 26, 1938 in Pearisburg, VA. He earned a Bachelor’s degree in Chemical Engineering in 1961 and a Master’s in Business Administration in 1971, both from Virginia Tech. Mr. Martin began his career in Virginia, but eventually relocated to Marietta, GA with his family where he worked as a Beverage Base Plant Manager at Coca-Cola. He retired from Coca-Cola at the young age of 55. In his spare time, Nick, or Gick, as he was known by his family, enjoyed traveling with his wife and friends, golfing at Big Canoe, cheering on the Virginia Tech Hokies, and spending time with his kids and grandkids. A memorial service to celebrate the life of William Earl Martin Jr. (Nick) will be held in the Big Canoe Chapel 226 Wolfscratch Cir, Jasper, GA 30143 at 2pm, Friday, January 5, 2018. In lieu of flowers, donations may be made to Wellstar Tranquility at Kennesaw Mountain https://www.wellstar.org/foundation/pages/donate.aspx A memorial service will also take place in his hometown of Pearisburg, VA at a later date. Details to follow. White Columns Chapel & Cremations is honored to serve the family of William Earl Martin, Jr.

The family of William Martin Jr. created this Life Tributes page to make it easy to share your memories.

Send flowers to the Martin family.