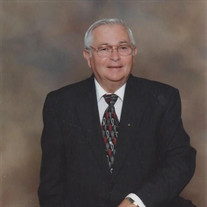 William S. Nesbitt, Jr. (JUNIOR), age 85, or Smyrna Georgia went to be with His Lord on Sunday, April 27, 2020. He was preceded in death by his wife, Lois C. Queen Nesbitt. He is survived by his daughters and sons in law, Cheryl and Rick Binns and Janet and Al Vineyard, all of Powder Springs; grandchildren, Davi (Matt) Hudson, Phillip (Katie) Vineyard, and Stephen Vineyard; great grandchildren, Reagan Hudson and Theo Hudson; brother, Billy (Nan) Nesbitt and sister, Diane Nails; many nieces and nephews. Junior was born and raised in Mableton Georgia and lived his entire life within 5 miles of his birthplace. He married his high school sweetheart. They were married for 60 years at the time of her death. He was retired from the Cobb County Board of Education Maintenance Department and as a bi-vocational Music Minister. He was a longtime, faithful member of First Baptist Church of Mableton. He was fondly known by the children of the church as the candy man as he always had a pocket of candy for the children and the big kids (adults) too. He continued to faithfully serve his Sunday School class each week by choosing and leading a hymn at the beginning of class. One could also find him “working the room” each Sunday morning as he moved through the sanctuary greeting members and visitors. Junior was also an avid gardener. He was known for his tomatoes and other vegetables that he freely gave to anyone that wanted them. He was known in his neighborhood as the man with the “beautiful yard full of flowers and trees”. While in his garden or yard, one would always hear him whistling or singing a favorite hymn. Most importantly, Junior was a man of integrity that lived His life for His Savior and Lord. Arrangements handled by Gene Davis White Columns Funeral Home in Mableton. In response to the Covid 19 pandemic, there will be a private family graveside service on Thursday, April 30, 2020 at 12:00 PM at Union Grove Baptist Church Cemetery, Lithia Springs Georgia. A public memorial service will be scheduled at a later date. In lieu of flowers, the family asks that donations be made in Junior’s memory to First Baptist Church of Mableton, 5385 Church Street, Mableton, Georgia 30126.

William S. Nesbitt, Jr. (JUNIOR), age 85, or Smyrna Georgia went to be with His Lord on Sunday, April 27, 2020. He was preceded in death by his wife, Lois C. Queen Nesbitt. He is survived by his daughters and sons in law, Cheryl and Rick Binns... View Obituary & Service Information

The family of William Nesbitt Jr. created this Life Tributes page to make it easy to share your memories.

Send flowers to the Nesbitt family.