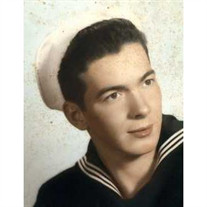 William Wayne Rollins, age 81, of Mableton passed away Friday, May 13, 2011. Wayne was born to William Goodwin and Ruby Turner Rollins on February 18, 1930 in Dalton, Georgia. He attended public school as well as Berry School for Boys in Rome, Georgia. Wayne sailed with Merchant Marines for a while of the Great Lakes. In November 1950, he joined the U.S. Navy, during the Korean War. He received his training in machining in San Diego, California. On May 12, 1951, he and Leota Ledford were married and moved to Key West, Florida. While there, he served on the U.S.S. Howard W. Gilmore as a Sub Tender. He sailed to several ports including Cuba, Norfolk, Virginia, and other places at sea. Later, in 1953, he served in New London, Connecticut where he had the opportunity to have connections with the Nautilas, the first atomic submarine. He made the rank of 2nd Class Petty Officer after completing his 4 years of duty with an honorable discharge. He applied himself with the training and schooling of machinery repairman, tool and die works. Wayne was a great bowler with many awards and loved to golf. On vacations, the golf outings were filled with great pleasure: golfing with his children, grandchildren, and even his great-grandson. Wayne was a member of Concord Baptist Church and will always be remembered for his great sense of humor, love of life, and witt. William Wayne Rollins is survived by his loving wife of 60 years, Leota "Lee" Rollins; one daughter, Jeannie E. Waters and her husband Tim Waters; four sons, Gary W. Rollins, Sr. and his wife Susie, Don Rollins and his wife Jeannett, Keith Rollins and his wife Becky, and Kim Rollins; a nephew that is considered a son, Rick Rollins; sisters, Lucille McCaleb, Waunita and husband Edd Babb, Lena and husband Moses Ballew, Sandra and husband Douglas Ellis, Eulene Talley, and Marie and Tommy Brown; 8 grandsons; 2 granddaughters; 8 great-grandsons; 3 great-granddaughters; and many loved members of the extended family. The family will receive friends Saturday, May 14, 2011 from 2:00pm-4:00pm & 6:00pm-8:00pm at Gene Davis-White Columns Funeral Chapel in Mableton. The funeral service will be held on Sunday, May 15, 2011 at 2:00pm in the funeral home's chapel with Rev. Richard Wilkins, Rev. Jerry Campbell, and Rev. Eddie Barton officiating. Interment will follow at Georgia Memorial Park Cemetery in Marietta. In lieu of flowers, please make donations to the following: Hospice Advantage 1925 Vaughn Road Suite 200 Kennesaw, Georgia 30144

William Wayne Rollins, age 81, of Mableton passed away Friday, May 13, 2011. Wayne was born to William Goodwin and Ruby Turner Rollins on February 18, 1930 in Dalton, Georgia. He attended public school as well as Berry School for Boys in Rome,... View Obituary & Service Information

The family of William Rollins created this Life Tributes page to make it easy to share your memories.

Send flowers to the Rollins family.